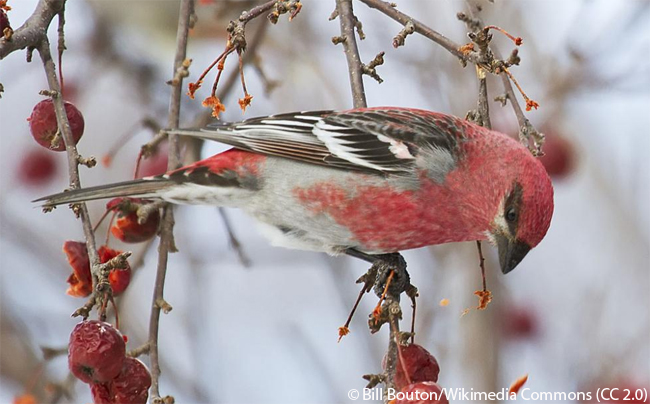 Most people would assume that a bird named the Pine Grosbeak would have a close association with pine forests or pine trees.

If you think that, you’re wrong. But it’s not your fault.

On the one hand, you have the Pine Warbler. That species is found almost exclusively in pine trees. Here where I live in Maine its liquid trilling song can be heard emanating from just about every grove of white pines in the state during the summer. Pine Warblers leave the Northeastern U.S. for the winter except for the occasional individual that persists and survives by eating suet at a backyard bird feeder. Most Pine Warblers spend the winter months in the southeastern U.S.

On the other hand, there is the Pine Grosbeak, which, despite its name, is rarely seen in pines. The species breeds across boreal regions of North America, Europe, and Asia where it is most typically found in habitats dominated by spruce, larch, and fir rather than pines. Here in North America, an estimated 89 percent of the breeding range of Pine Grosbeak is found within the boreal forest region of Canada and Alaska. The species also breeds in the Maritimes and occasionally in northern Maine; in the western U.S., small nesting populations occur at higher elevations south into California, Arizona, and New Mexico. 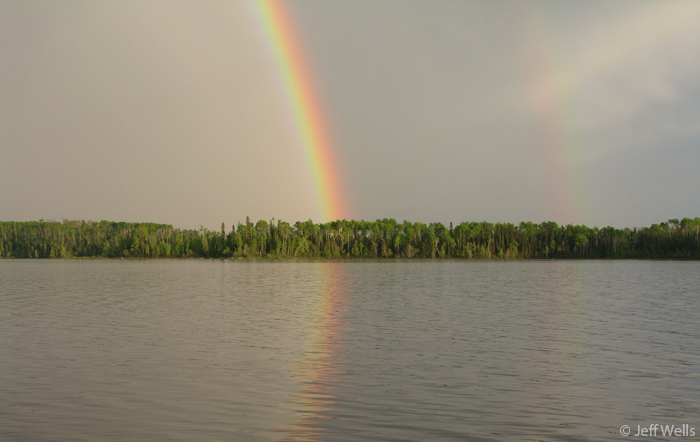 The Pine Grosbeak is almost entirely reliant on the boreal forest for summer breeding grounds.

For most people in the Northern Plains, Midwest, and Northeast U.S., Pine Grosbeaks are an occasional winter visitor in small flocks. They are considered an “irruptive”—a species that migrates south from its normal range in some years in relatively large numbers. In the Pine Grosbeak’s case, this means that at irregular intervals the species comes down as far south as about the northern half of the U.S., with occasional individuals making it even farther south to states like Texas, Arkansas, and South Carolina.

Being closer to the breeding range, my region of Maine is more often blessed with Pine Grosbeak in the winter, and this year is shaping up to be one of those with multiple sightings across the northern half of the state over the last month or so. In our area, they often zero in on crabapple trees, where they can be seen mashing up the fruit to get to the seeds within.

One of the qualities about Pine Grosbeaks that endears them to people but also makes them vulnerable is that they tend to be quite unwary of close approach by humans. Some will allow a person to come within a few feet without showing signs of concern. In places like Newfoundland and Sweden, there are colloquial names to indicate this unwariness, although the names are often a bit uncharitable, denoting the birds as stupid or foolish. In his writings about Pine Grosbeaks, Audubon himself noted that people in Maine sometimes captured the birds for food using snowshoes (though how, exactly, is hard to understand from his description).

Pine Grosbeaks have a wonderful sweet, mellow “tu-tu-tu” call that is often the first sign of their presence. Hopefully you’ll have a chance to enjoy hearing and seeing some of what might be better called the “Spruce Grosbeak” or maybe the “Boreal Grosbeak” in your neighborhood this winter.