Listening to the Secrets of the Boreal 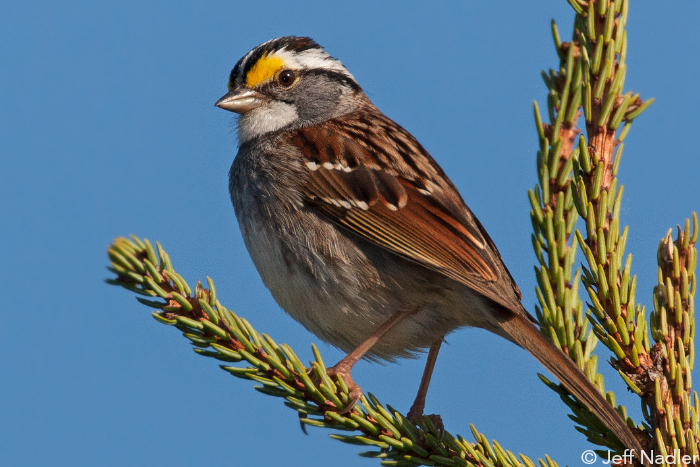 Here at the Boreal Songbird Initiative we have been excited by a unique opportunity to bring together Indigenous science and Western science in collaboration with some of our Indigenous partners. The idea is to test out some new ideas and new technology, guided by Indigenous science, for getting more and better information on the birds that inhabit some of the remote parts of the Boreal Forest region, especially areas that have been identified as of high conservation priority by Indigenous governments and communities.

We decided to make use of a relatively new technology called autonomous recording devices—essentially stripped down mini-computers in waterproof cases with built-in small waterproof microphones—that can be placed in a location and left for weeks or months to make and save sound recordings at whatever schedule you want.

The recordings can then be later downloaded and listened to or analyzed acoustically to determine the species and numbers acoustically detectable at each location. The sound files can then be archived for use by researchers interested in other questions or to compare in the future. And they can be shared with the world so even those who may never visit any of these locations can get a sense of what it might be like to be there! 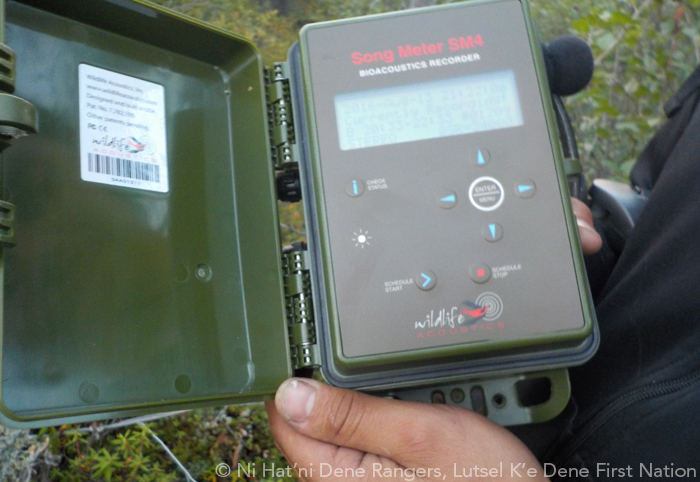 Three First Nations were part of this initial collaboration: the Poplar River First Nation in Manitoba, Lutsel K’e Dene First Nation in the Northwest Territories, and the Cree First Nation of Waswanipi in Quebec. The First Nations decided on the areas for which they wanted to get bird information and they managed and deployed the sound recording units as part of their own efforts to build their own land stewardship, monitoring and management programs. These kinds of programs, sometimes called “Guardian” programs are being led by Indigenous governments and communities across Canada and the world. 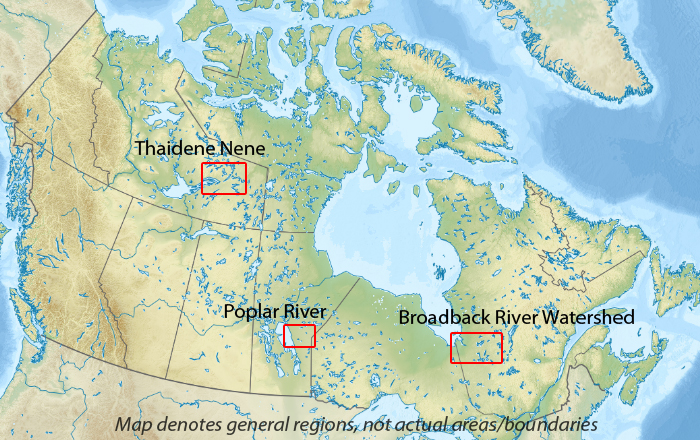 Song Meters were deployed by the Lutsel K'e Dene First Nation in the proposed Thaidene Nene National Park Reserve, by the Poplar River First Nation near the river the First Nation is named after, and by the Cree First Nation of Waswanipi in the Broadback River watershed.

In fact, the Lutsel K’e Dene First Nation in the Northwest Territories, who are moving forward the plan for the co-managed Thaidene Nene National Park Reserve around the Eastern Arm of Great Slave Lake, have been running such a program called the Ni Hat’ni Dene ("Dene Watchers of the Land") Program for eight years. It was the Ni Hat’ni Dene Program who brought the sound recording units out on the land with them and set them up in strategic locations in remote parts of the East Arm of Great Slave Lake in July and August of 2016.

At the present time, one of the most popular and widely available automated recording units is called the Song Meter, sold by a company called Wildlife Acoustics based near Boston. Boreal Songbird Initiative purchased some of these Song Meter units and sent them up to our partners at each of the three First Nations. There were some bumps in the road as there are often when trying to ship items to remote communities so a number of them didn’t arrive until mid-summer when the peak bird song season was over. But all of the sound recording units were taken into the field and deployed anyway for testing purposes and to see what species might be detectable in later summer and early fall.

We are still in early stages of getting the files sorted and analyzed but already we have had the opportunity to share with the world some of the acoustic beauty and surprises recorded on some of the  Song Meters.

At the Poplar River First Nation in Manitoba, several Songmeter units were deployed along the lower reaches of the Poplar River from May into early July, 2016. The Poplar River First Nation is one of the communities that are part of Pimachiowin Aki ("the land that gives life"), the proposed World Heritage Site and a global leader in Indigenous-led conservation efforts. They established an incredible two-million-acre protected area on their traditional lands! The Song Meter sound recordings provide one of the first opportunities for much of the world to listen in to the amazing diversity of birds found on these lands each summer. 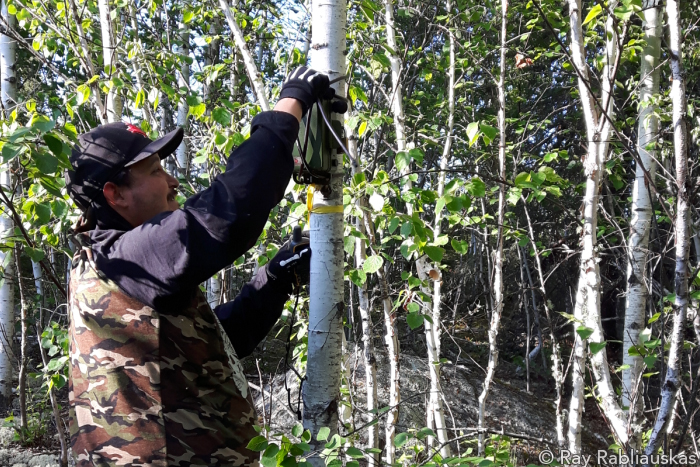 Here are some links below to a few recordings from Song Meters along the Poplar River in Pimachiowin Aki. You may hear the ubiquitous whistled “Oh-Sweet-Canada-Canada-Canada” song of the White-throated Sparrow in many of them, the squeals of a young Bald Eagle in another with the sounds of Onakuyamis Falls in the background, the distant “Who-cooks-for-you” hooting of a Barred Owl in another, and a cacophony of warblers, thrushes and other songbirds in dawn chorus in others.

A single Song Meter unit was deployed in July and August, 2016 at several locations in the Thaidene Nene region in the East Arm of Great Slave Lake, Northwest Territories by the Ni Hat’ni Dene Rangers of the Lutsel K’e Dene First Nation. This First Nation has been leading the way for decades to establish a co-managed protected area more than six million acres in size including plans for the Thaidene Nene National Park Reserve. This stunningly beautiful and important landscape may not be well-known to many in southern Canada and the U.S. but we hope you may enjoy the experience of listening to some of the mid to late summer sounds of Thaidene Nene. 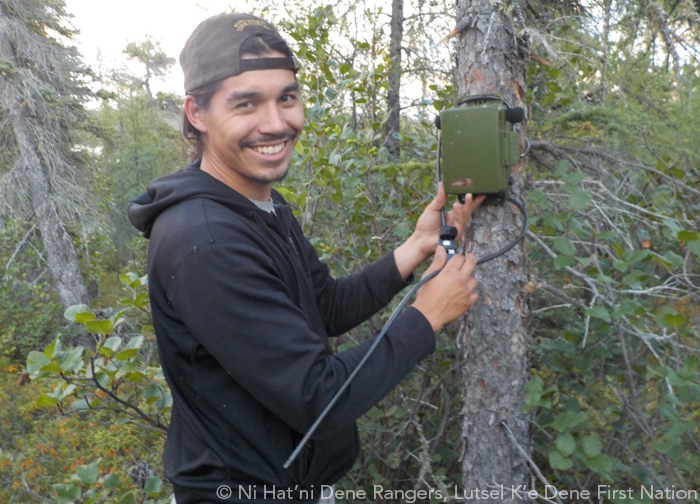 In some of them you will hear gentle waves lapping along the shore with Boreal Chickadees, Dark-eyed Juncos, and Lincoln’s Sparrows singing in the early morning. In others you may hear the sounds of Herring Gulls, Common or Red-throated Loons, Common Ravens or American Robins echoing out over the waters on a calm evening. 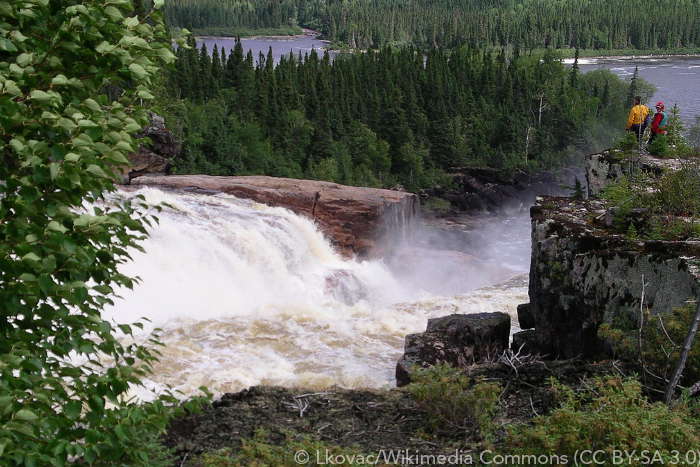 Two Song Meters that met an exceptionally long delay in Customs on their way to the Cree First Nation of Waswanipi were not able to be deployed by the team there until Fall of 2016 when they set them up in some areas of the Broadback River Watershed to see if they might be able to pick up any rutting Moose calls. These sound files are yet to be sampled but we will give you an update when we find out more! The Cree First Nation of Waswanipi is leading efforts in the Broadback River Watershed to ensure that a portion of that watershed within their traditional territory receives protection. At present much of the area that they would like to see protected is slated for logging or is being actively harvested.