The following is a guest post by Amélie Roberto-Charron. Amélie is an M.Sc. student with the University of Manitoba (as well as recent co-author in our Charting a Healthy Future for North America's Birds report) who has been conducting field research on Canada Warblers with help from the Boreal Songbird Initiative, TD Friends of the Environment, New Brunswick Wildlife Trust Fund, Environment Canada, and the University of Manitoba.. 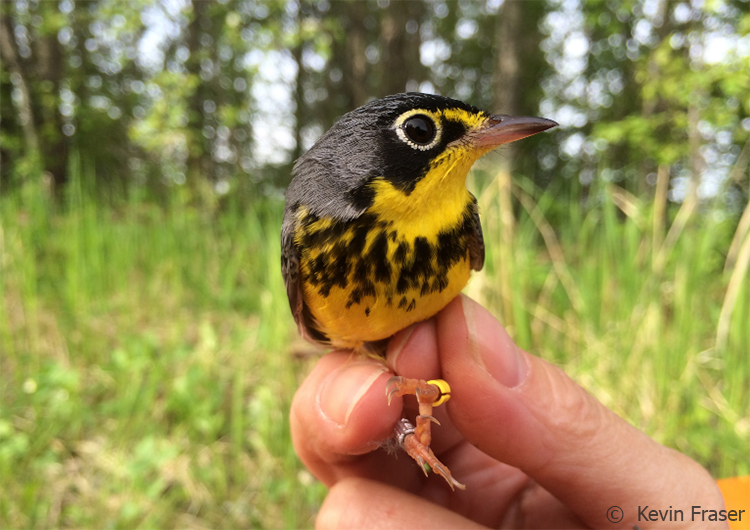 The Canada Warbler is an iconic and colorful warbler that breeds in the boreal forest of Canada and the United States and overwinters in the cloud forest and rainforest of the Amazon Basin and the Andes in South America. Unfortunately this small songbird is listed as threatened in Canada by COSEWIC.

This species has been declining by an average of 2.3% per year across its breeding range from 1966 to 2013 according to Breeding Bird Survey data. The causes of the decline are currently unknown. In an attempt to better understand the complete life cycle of the Canada Warbler and threats they may face, we deployed light level archival migration monitoring devices, known as geolocators.

These geolocators sit on the back of the bird (similar to a backpack) and record light levels and Greenwich Mean Time. From these measures it is possible to determine the latitude and longitude for each day that the warbler has the tag on. Incredibly, these monitoring devices weigh as little as 0.3 grams!

Deploying the geolocators is not particularly challenging. The difficult step is recovering them. As the devices do not transmit any information, one must retrieve the device in order to obtain the data contained within. Which is easier said than done when you are looking for a 9 to 12 gram songbird in dense forest canopy! Incredibly when returning to the field sites where geolocators were deployed the previous year, we recovered the first ever Canada Warbler geolocators!

Recovering the first geolocators was well worth being ravaged by mosquitoes, the fruitless hours of searching and the many kilometers of hiking. Holding the Canada Warbler that went to South America and back with a geolocator put our challenges in perspective! 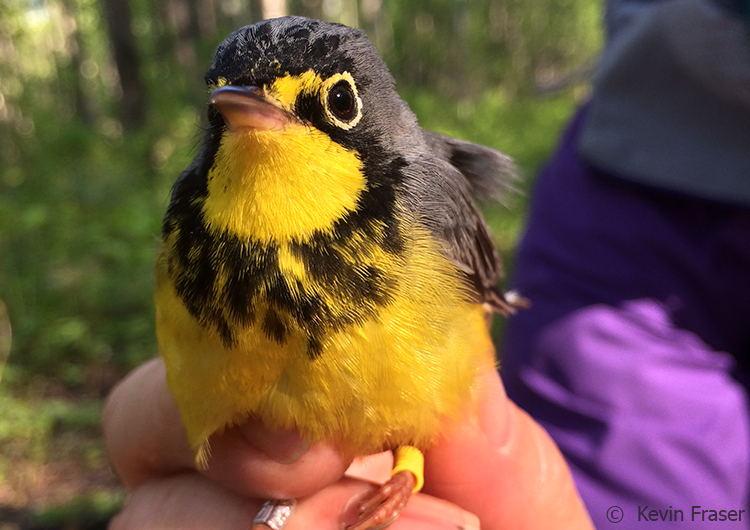 Known by the rather uninspiring name of ‘Band Number: 1584-48468’, this incredible little bird made it back to its breeding ground with a geolocator. Once analyzed, the data from the recovered geolocator will provide valuable information on factors that could be impacting Canada Warblers and what can be done to help conserve this species.

In the upcoming years we will continue to deploy and recover geolocators across the  Canada Warbler’s breeding range to identify the migratory routes and wintering grounds used by different populations, and the threats that could be impacting certain populations at each stage of their life cycle.