Whooping Cranes Are Still With Us 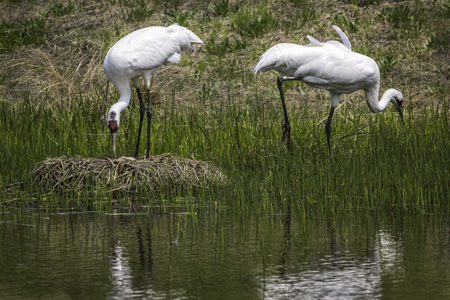 BirdLife International just announced its new list of the world’s most endangered birds and the Whooping Crane is on that list. The fact that there are still any Whooping Cranes on the planet is at least partly because a portion of their original widespread population nested in a part of the still intact boreal forest—in this case in Wood Buffalo National Park. When Wood Buffalo was established as a national park in 1922 the nesting grounds of the remaining Whooping Cranes that wintered on the coast of Texas were unknown. The park was established to save another endangered species—some of the last remaining woodland-inhabiting bison or buffalo in North America. It was not until more than 20 years later—in 1954-- that Whooping Cranes were conclusively sighted in the park and confirmed as breeders. Unfortunately at that time there were only about 30 Whooping Cranes left in existence. Fortunately, focused conservation work has brought the species back from the brink so that there are over 500 alive now though only about 250-300 of those are in the original wild, migratory population which nests in Wood Buffalo (others are in experimentally released populations or in captive populations – read more about them here in my book Birder’s Conservation Handbook.

Unfortunately, not only are populations of Whooping Cranes very vulnerable given their small total numbers, BirdLife International reported that one in eight bird species is endangered or vulnerable. Some of these may already be extinct. The Eskimo Curlew is one of these. There are no confirmed sightings since a bird was killed in Barbados in 1963 (more from its chapter in my Handbook). The only known nesting areas include part of the Copper River watershed, some of which is in or near some of the new diamond mining ventures in the Northwest Territories. 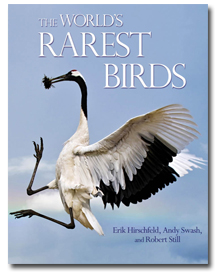 A new book by Princeton Press, The World’s Rarest Birds, highlights these and 588 other species of endangered birds from across the world. The authors painstakingly searched to obtain photographs, in part through an international photography competition, to try to get photographic images of all of the 590 species discussed in the book. They succeeded for all but 75 species, some of which have not been seen for decades, and for those pulled in artist Tomasz Cofta to illustrate them.  Along with a pithy account of the status of each species with a map and an estimate of its population size, the book also has insightful analysis of the issues impacting bird populations and geographic and taxonomic analysis of how bird populations are faring. An interesting and sobering fact that jumped out at me was how many shorebird species that breed in parts of the Siberian boreal forest region are now highly endangered.

Let’s hope that we can keep working in Canada’s Boreal Forest to show how proactive conservation can ensure that we don’t add any more of our bird species to the next edition of BirdLife’s list of globally endangered species.