The following is a guest blog by Junior A. Tremblay, Research Scientist for Environment and Climate Change Canada. Many thanks to Junior for sharing this impressive research project with us! 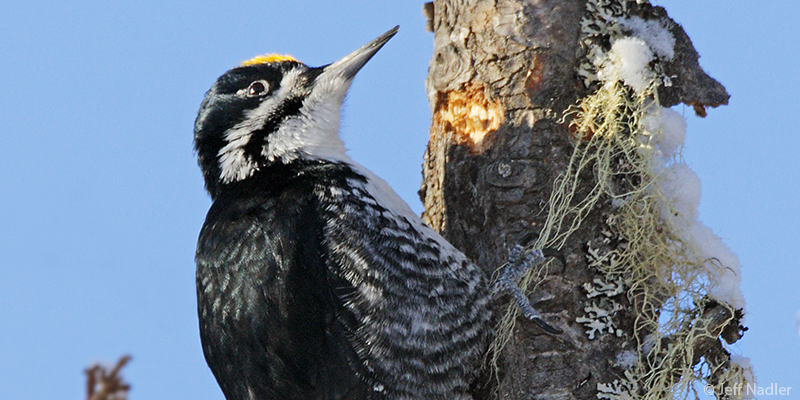 Forest ecosystems are facing diverse anthropogenic pressures, and impacts of climate change may amplify threats to forest biodiversity. Indeed, land use change and associated habitat degradation have been cited as important causes of population declines for many species in forest ecosystems. Although the boreal forest is often seen as a pristine ecosystem, this region, and in particular the southern border, is facing some of the same impacts and experiencing some of the same stressors as other forest ecosystems around the world. But, the boreal forest is a dynamic ecosystem where natural disturbances such as forest fires and insect outbreaks regulate forest succession at large scales. As such, boreal birds have evolved to be resilient to a certain amount of disturbance, but how much disturbance is too much? This is an important question for boreal bird conservation, especially in a context of increasing anthropogenic pressures.

Boreal woodpeckers, namely American Three-toed and Black-backed Woodpeckers (respectively Picoides dorsalis and P. arcticus) are known to respond to the intensity and severity of natural disturbances, such as forest fires. These species are also known to be sensitive to forest management and thus useful for addressing sustainable forest management issues, especially related to deadwood attributes at the stand-scale and proportion of mature and old forest stands in the landscape. This sensitivity is the reason why many jurisdictions use these two boreal woodpeckers as indicator species of healthy forest structure.

Recent advances in technology offers new perspectives, and boreal woodpeckers have always been very difficult to monitor, mostly due to the remoteness of their habitat and their large territories. But now, miniaturized transmitters provide an opportunity to obtain automated GPS locations based on a programmed schedule. Here, I am presenting some highlights from a new project that started this summer (2017) using this technology to assess ecological thresholds of forest disturbance to boreal woodpeckers space and habitat use in a heavily managed landscape of eastern boreal forests. 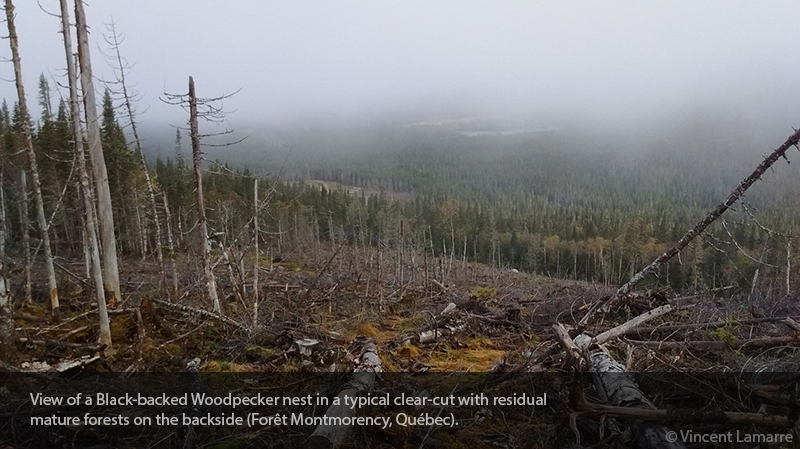 We attracted boreal woodpeckers by using audio playback (i.e., an audio recording broadcast over speakers) of species specific calls and drumming. We captured woodpeckers that aggressively responded to the call-playbacks using mist-nets. We measured standard morphometrics (e.g., wing length, tarsus length, weight, fat load), looked at molt limits to estimate bird age, and fitted each individual with a miniaturized GPS transmitter on the central rectrices of the bird. In total, we captured and fitted 12 Black-backs and 4 American Three-toeds with the GPS transmitters. Because the GPS transmitters record the location data internally, to get the location data, we needed to either 1) download the data by VHF transmission (only for Black-backed Woodpecker transmitter model) from a distance of 500m or 2) retrieve the transmitter once the woodpecker molted their rectrices. At the end of the summer, we succeeded to get data from 10 of the 16 deployed transmitters (7 Black-backs and 3 American Three-toeds). 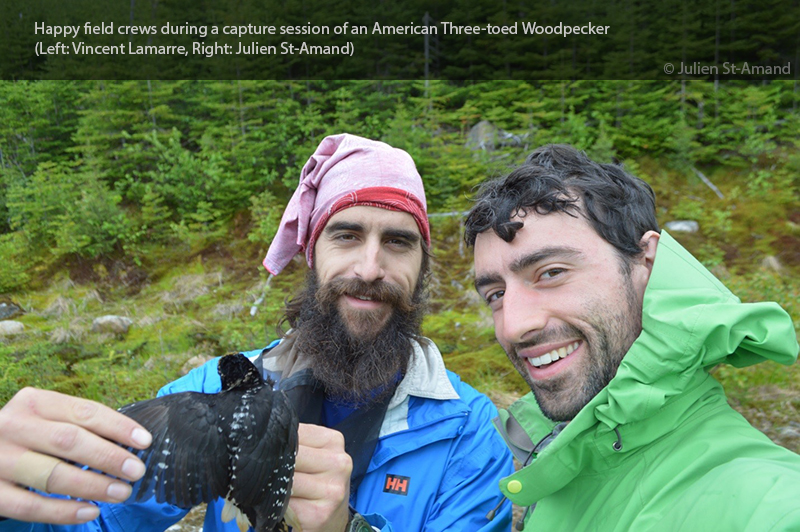 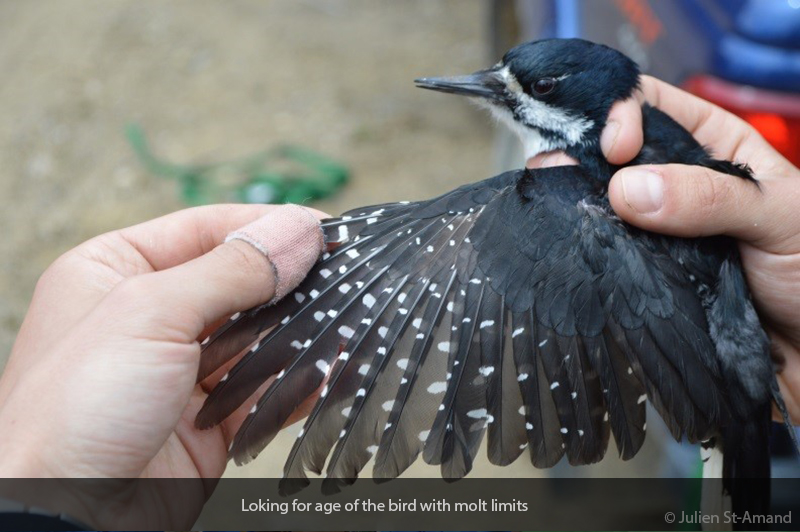 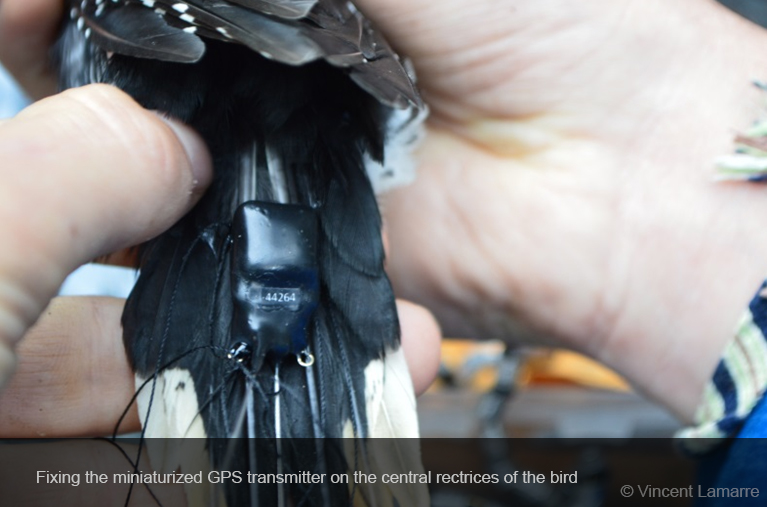 While traditional foot-based or homing terrestrial telemetry studies often result in a low number of locations being obtained given the challenges of following a bird with a transmitter through the forest while not disturbing the bird, our automated GPS transmitters resulted in a large number of spatial locations per bird, with a mean of 257 locations for Black-backed (range: 35-547) and 36 for the American Three-toed (range: 15-56) woodpeckers. This data offers us the ability to better understand habitat requirements for the species at all stages of the breeding season, and how territory size and home-ranges shift forest disturbance. For instance, with respect to habitat requirements, we placed a transmitter on a female Black-backed Woodpecker on June 6th, and we downloaded to August 1st. We also monitored the nest for this female.  Unfortunately, the nest was predated on July 4th 2017. However, because we have locations for this female before and after her nest was depredated, we are able to observe a shift in space use and habitat selection following this event and further analyses will be made to explain these shifts in relation with habitat configuration of this landscape. 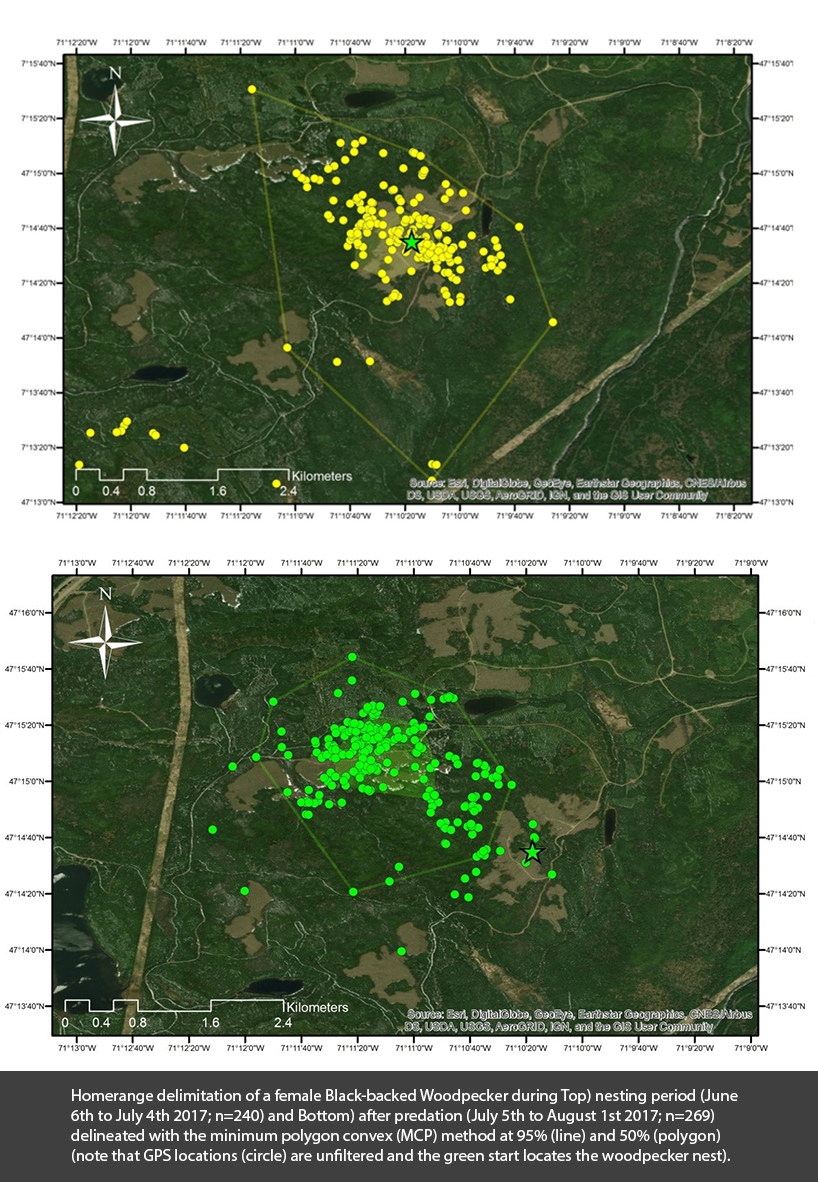 These are only some insights of this project, but show how boreal woodpeckers are sensitive to habitat configuration and are useful species to assess sustainable forest management, helping to ensure conservation of a suite of boreal birds. In the near future, we plan to analyze the data in more detail and continue field work next spring!