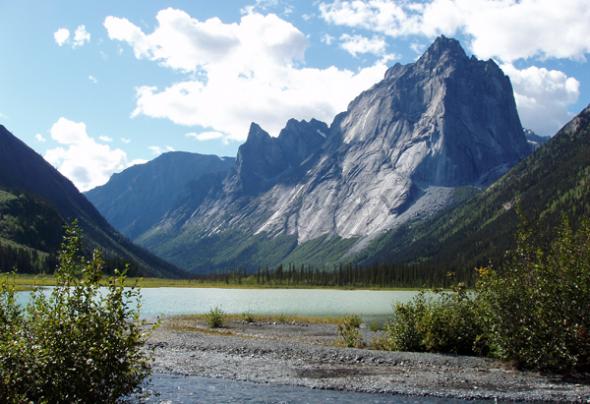 The massive Mackenzie River Basin is not only Canada's largest watershed, it's also home to some of the most interesting and important areas in Canada's boreal forest both from a natural and policy standpoint. It contains breathtaking scenery like recently-expanded Nahanni National Park, which features towering mountains interspersed by dramatic, lush river valleys. It contains extensive wetlands and waterways, including some of North America's most critical waterfowl breeding and migratory stop-over areas like the Peace-Athabasca Delta, the Slave River Delta, the Mackenzie Delta, and the Ramparts. It's wetlands and waterways also make it an incredibly rich region for migratory waterfowl in general.

However, it's southern portion in Alberta and British Columbia is home to some of the most altering and extensive resource development anywhere in the boreal, and has even led to inter-provincial discussions about shared resources like water. Much of its drainage basin in the Northwest Territories includes areas that have been temporarily protected through visionary First Nation-led land use plans, but whose permanent status is still in limbo.

So it should come as no surprise that groups like the Gordon Foundation have taken particular interest in the region. They recently embarked on creating this fascinating mini-movie on the area:

Here's an excerpt from their website on why they created the film:

At 1.8 million sq. kilometres, the Mackenzie River Basin is Canada's largest watershed, draining a full 20 per cent of Canada's landmass, but many in both northern and southern Canada are unaware of its importance, or even its existence. It is for this reason that the Gordon Foundation set out to make Cold Amazon, a documentary film released online today.

Narrated by celebrated northern journalist Paul Andrew, Cold Amazon tells the story of the Mackenzie River Basin, highlighting the importance and vulnerability of the mighty watershed through the impassioned voices of those who rely on its health and work for its protection.

If there's a place that deserves a 'worthy of attention' tag, the Mackenzie River Delta is certainly on that list. So you can imagine why we're pleased to see this lengthy and detailed video highlighting its importance. You can find out more about the Gordon foundation at www.gordonfoundation.ca.