North American Boreal Forest Is One of Largest Intact Primary Forest Areas on Earth, Not Highly Fragmented as Paper Suggests

Note: the eLetter below is part of a discussion published at http://alert-conservation.org/issues-research-highlights/2015/4/18/heated-debate-over-boreal-forests.

The paper “Habitat fragmentation and its lasting impact on Earth’s ecosystems” by Nick Haddad and 23 co-authors published in the 20 March, 2015 issue of Science Advances provided an incredibly important documentation of the many and varied negative impacts to biodiversity that result from human-caused large-scale fragmentation of intact forest habitats. Although there are regional differences in the ways in which fragmentation impacts various biodiversity features, the effects are largely generalizable across the world’s forests.

There are a few regions of the globe where there remains large tracts of forest that are not fragmented by human activities—so-called primary forests. These areas have been mapped in a number of ways over recent decades and all show five large areas of remaining primary forest. The largest are the North American Boreal Forest, the Siberian Boreal Forest, the Amazon Forest followed by the Congo Basin Forest and the forests of New Guinea and other parts of Indonesia. In fact, some analyses indicate that the world’s largest single intact blocks of forest habitat are now found in the Amazon and in Canada’s Boreal Forest.

Given these facts it was astonishing and disappointing to see in the paper, a map purporting to show forested areas of the globe that are most impacted by fragmentation (defined in the paper as “the division of habitat into smaller and more isolated fragments separated by a matrix of human-transformed land cover”) that portrayed the North American boreal forest as heavily fragmented rather than intact as it truly is. In the paper the authors write that they are presenting “a global analysis of the fragmentation of forest ecosystems, quantifying for the first time the global hotspots of intensive historical fragmentation.” They go on to say that their analysis showed that “nearly 20% of the world’s remaining forest is within 100 m of an edge—in close proximity to agriculture, urban, or other modified environments…”

Clearly the implication in this statements and others in the paper is that the mapping analyses presented in the paper intends to portray the world’s forest ecosystems that are most impacted by anthropogenic fragmentation. In fact, the map in the paper shockingly indicates that the most northern portions of the Boreal Forest region of North America are among the most fragmented in the world. Anyone with knowledge of northern and Arctic regions would likely be rather astonished by this portrayal given the incredible lack of human industrial fragmentation in this remote and generally inaccessible part of the world. The inaccurate and misleading map and analysis is the result of a mischaracterized data set that labels natural fires, intact peatland and tundra (far from any human industrial footprint) as the same as clearcuts, areas cleared for agriculture or mines, roads, powerlines and other human caused fragmentation.

While as a scientific issue this mischaracterization is serious enough, more troubling is the fact that media stories about the paper included quotes attributed to the first author like this one in a story in the New Yorker: “There are really only two big patches of intact forest left on Earth—the Amazon and the Congo—and they shine out like eyes from the center of the map.”

Or this statement in Climate Progress: “Haddad was surprised by the degree that Boreal forest in Canada and Siberia has already been sliced up.”

These statements are fundamentally incorrect and are a serious blow to conservation initiatives in the massively large, truly intact Boreal Forest region of North America where incredible efforts are underway that are succeeding in achieving some of the world’s largest forest conservation gains.

Canada’s Boreal Forest region (an area of approximately 5.6 million km2) is estimated to contain 25% of the world’s remaining primary forest within its Boreal Forest region, storing a minimum of 208 billion tonnes of carbon (Carlson et al. 2009), supporting some of the world’s largest populations of northern large mammals including some that undertake the world’s last large-scale annual migrations (Wells et al. 2013, IBCSP 2013, Bradshaw et al. 2009) and hosting 1-3 three billion nesting birds, most of which migrate south to populate temperate and tropical forests (Wells and Blancher 2011). This vast intact forest region continues to be inhabited by to hundreds of indigenous communities that maintain their cultural traditions including harvesting native fish and wildlife for subsistence.

Over 870,000 km2 of new protected areas have been established across Canada’s Boreal Forest region in the last 15 years and the governments of Ontario and Quebec are pursuing conservation visions that together would strictly protect (IUCN categories I-IV) an additional 858,000 km2 of intact, primary forest. In the Northwest Territories, over 425,000 km2 of new protected areas and interim protected areas are the result of leadership of indigenous governments that have developed sophisticated land-use plans combining traditional knowledge and Western science approaches.

What is particularly tragic in the portrayal of North America’s Boreal Forest as one of the parts of the world that is most highly fragmented by human industrial activities is that indeed the region is, like the Amazon and the Congo Basin, under the same kinds of pressures for natural resource extraction and infrastructure development with the same kinds of biodiversity losses that result from anthropogenic fragmentation. Scientists and conservationists working in the world’s last remaining large intact, primary forests (whether tropical or boreal), should become more conversant with the ecology of and threats to these last, special places of the world. The issues impacting the last large blocks of tropical forest and boreal forest are similar and the conservation lessons and solutions share many similarities as well. There is a need to bring together those working to protect these forests to increase global awareness of the importance of intact, primary forest regions to the globe and to more efficiently and quickly move to protect them while there is still time to do so. 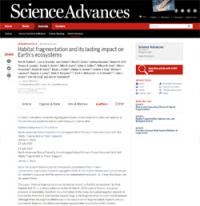