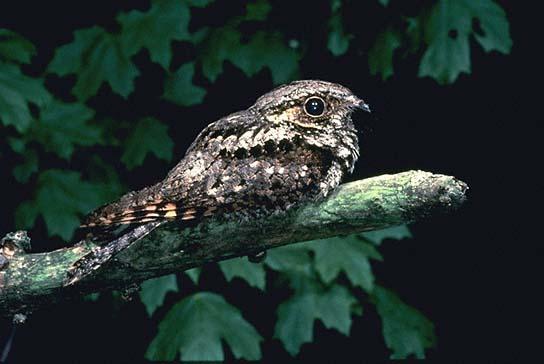 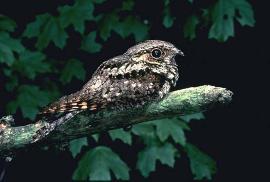 The Whip-poor-will is rarely seen because it sleeps by day on the forest floor, its coloration matching the dead leaves. At night, its eyes reflect ruby red in car headlights. Whip-poor-wills, like other night-flying birds, were once suspected of witchery. They fly around livestock at dusk to feed on insects swarming over the animals. It was believed that they sucked milk from goats' udders and caused them to dry up; hence their family name, Caprimulgidae, from the Latin capri and mulgus, meaning "goat-milker." Until recently they were inaccurately called "goatsuckers," but now the name "nightjar" is preferred.

A loud, rhythmic whip-poor-will, repeated over and over, at night.

2 white eggs, scrawled with gray and brown, placed on the ground among dead leaves.

Breeds from Saskatchewan and Maritime Provinces south to Kansas, northern Louisiana, and northern Georgia, and in Arizona, New Mexico, and western Texas. Winters from Florida and Gulf Coast southward.